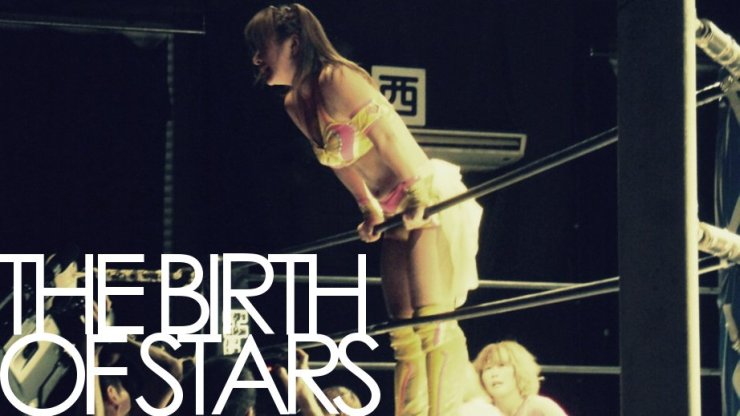 On my last trip to Tokyo, several of my Joshi watching friends were a bit surprised that my show itinerary did not include Stardom. Apparently, the company was the new hotness on the Japanese pro wrestling scene, (“It is now so famous company,” as one put it). The promotion has developed a sizable following in a very short time due to savvy cross-promotion, guided by Rossy Ogawa of ARSION fame and Fuka of Fuka fame, as well as a stable of young, appealing women that vets Nanae Takahashi, Natsuki*Taiyo, and Fuka herself, kicked, chopped, and choked into wrestling shape.

Not wanting to be behind the times, I finally took in my first Stardom live at Shin-Kiba on September 17th. The event was the penultimate show for Stardom’s 5 Star Grand Prix Tournament, a massive undertaking where a dozen of Joshi’s best competed in a block style tourney. Besides Stardom regulars like Nanae Takahashi, Natsuki*Taiyo, Io Shirai, and Yuzuki Aikawa, they also invited Canada/Mexico’s Dark Angel, Zero-1’s teen sensation Yuhi, and freelance psychopath Kyoko Kimura. Here were the results:

The show started with the retired but loved Fuka in gold hot pants dancing with a pop group before taking on her role as ring announcer. In spite of the entertainment, Stardom didn’t forget that “JOSHIPRO” was on the marquee. Shortly after Hiroyo Matsumoto came out and smashed through a couple trainees before the tournament matches got under way.

Yuhi is a beast, for a 17 year old that is. She’s incredibly innovative and I’m pretty sure half her moveset comes from King of Fighters. The equally amazing Io Shirai, who has looked better than ever since becoming a singles star in Stardom, had her hands full with the teen dream. This ultimately went the time limit, which can’t be complained about since all 15 minutes were so good.

Saki Kashima vs. Natsuki*Taiyo was much less evenly matched, but went to a draw as well. As amazingly fast as Taiyo is, she was not able to finish this in 15. Saki’s frail frame somehow survived the worst of Natsuki’s arsenal towards the end.

Kyoko Kimura and Dark Angel, who are both looking pretty diesel right now,[2. Kyoko also looks like she’s ready to team up with Kellie Skater again, as she’s ditched her braids for a mop top, and their gear is identical in form now.] had an outstanding brawl that Stock narrowly won. Sarah had tons of crowd support during the show, and afterwards in the merch line. Having been to Japan a half-dozen times or so, an extended tour of Stardom for this tournament was certainly a good call.

The main event was likely the most anticipated match of the tournament. Nanae Takahashi, Alpha Joshi and holder of the “new red belt” [1. The “Red Belt” was the famed WWWA title of AJW, the Stardom title pays tribute to its legacy.] World of Stardom title versus the holder of the “white belt” Wonder of Stardom Title, Yuzuki “Yuzupon” Aikawa.

Of all the women to join Nanae in Stardom, none has developed more as a wrestler or created more of a following than Yuzupon. She came to the promotion with a massive fan base due to her prior success as a gravure model, but she does much more than fill out a bikini. In her first match against Nanae she infamously had her chest welted and eye swollen shut from the brutal loss she sustained. Her reaction? Smile, pose, come back for more. Her beauty and her will-power brought her so much love that she was named Joshi of the Year for 2011, her first year in pro wrestling.

Yuzupon is a double champion in Stardom, as she won their inaugural tag title tournament with Yoko Bito. She was even given the honor of co-main eventing Bull Nakano’s retirement show against Hikaru Shida. However, she never avenged her first lost against Nanae. No matter how many accolades she received, her star always had that asterisk next to it.

It was debatable whether that would ever change. Pretty much no one beats Nanae nowadays. She’d gone 2 years without a singles loss prior to the September 17th show. But in front of 400 fans on the outskirts of Tokyo and, ironically enough, on Japan’s “Respect Your Elders” holiday, Yuzuki Aikawa finally toppled her mentor.

It wasn’t easy. Nanae, frankly, beat the shit out of Yuzupon, again. And, again, Yuzupon forced a smile through her bruised lips, posed with her welted chest, and came back for more, more, more. A blitz attack of multiple Yuzupon Kicks followed by a perfect Tiger Suplex was enough to keep Nanae down for exactly three seconds. Yuzupon’s supporters in the crowd erupted at the moment, but I doubt anyone was half as happy as her. She celebrated and thanked the fans on the mic to close out the show.[3. I ran into Nanae at Manami Toyota’s anniversary show and mentioned that I attended this event. Her reaction, “I lost.” I immediately apologized.]

As for the tournament overall, Yoshiko only needs to defeat Io this Sunday to punch her ticket to the finals from the Red Block. If she fails, then both Nanae and Yuzupon have a chance. In the Blue Block, things are little more open. If Stock wins then she goes, but if she loses or draws, Kimura could take the top spot with two wins on Sunday. You can run the numbers yourself in the chart below the gallery.

As for the show overall, I was very impressed with my first taste of Stardom. I think everyone knows how great Natsuki and Nanae are, but Io and Aikawa are absolutely amazing as well. Stardom has picked some excellent outside talent to bring in for this tournament, here’s hoping that’s a trend that continues past the tournament. Stardomn’s growth has already been a positive for the Joshi world and with their 2013 Sumo Hall, I hope the goodwill and excitement continues to spread.

Until next time, peace!