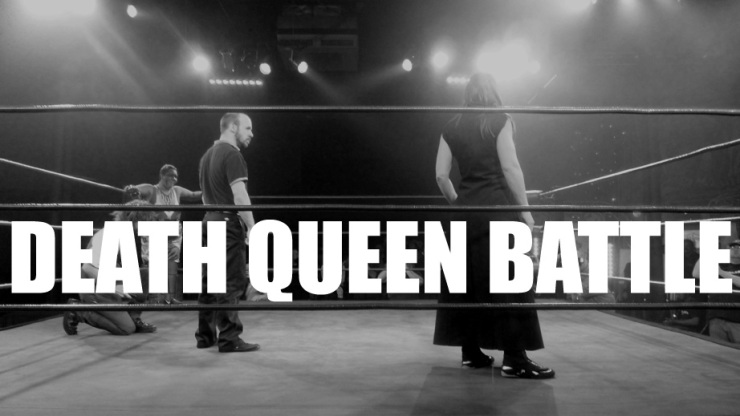 CHIKARA’s three-day dream slam of Japanese Women’s Wrestling, JoshiMania, had its first show last Friday at the historic ECW Arena. The event delivered an authentic Joshi Puroresu experience to American fans, with the added bonus of bringing stars from several different Joshi promotions. CHIKARA advertised this event as being a “Once in a Lifetime” opportunity for fans to see this sort of action without having to fly to Japan first. CHIKARA didn’t lie. Here’s how the weekend started:

The first thing, and perhaps only thing, you need to know about JoshiMania Night One is this: Tsubasa Kuragaki put Archibald Peck and one of the Ice Creams in a torture rack at the same time. The same time. Having the laws of physics challenged by one of the lesser known Joshi stars in the opening match set the bar fairly high for the rest of the evening. Japanese female wrestlers are known for their pride and competitive nature. The JWP women made it known from the outset they hoped to dominate this weekend (too bad the brilliant team of Peck and the Ice Creams were in the middle of that).

Of course, as everyone who has read our articles on her over at Diva Dirt knows [1. Take a look at Manami Toyota’s Historic Career here as well as her Greatest Matches here on Diva Dirt.], Manami Toyota is not satisfied unless she has put on the very best match on the show. That probably went double this Friday as Toyota was presented with the Diva Dirt Legacy award before her match with Toshie Uematsu. Toyota showed not only that she deserved the award for her past achievements, but also for her continuing performance and growth as a wrestler. Toyota has said that she felt invigorated by her trips to CHIKARA over the past year, and the new maneuvers she flaunted during JoshiMania were an example. Toshie, on her final tour of the US before her retirement early next year, was amazing as well. She showed once again that her larger than life character never overshadows her pure wrestling ability. It was an excellent match, perhaps the best either had had in the US.

Hoping not to be outdone by their guests, CHIKARA’s FIST and The Colony put on an exciting title bout. The ants showed off some JB Angels-esque fire while FIST resorted to L.C.O.-esque dickery. Dick won out, FIST retained, and Stargano remains a top champion in two of the United States’ finest wrestling promotions.

And then there was the much anticipated battle between Aja Kong and Sara Del Rey. As the most terrifying forces on their respective continents, the two death queens had been on a collision course for years. Somehow, Philadelphia managed to survive the inevitable crash.

Kong showed a lack of respect for Sara early on, refusing to shake hands. Sara returned the favor by barreling head first at her idol when the bell rang. The match was dark and unyielding. Sara kicked Kong as hard as she’s kicked anyone. Kong delighted in leaving handprints on the Death Rey’s chest, her thudding chops shaking the Queen to the core. After several minutes, but before either pulled out their MDK-level moves, Sara was able to dodge a Uraken and score a surprise pin on Kong to take the huge victory. A hard-fought battle for both, but each faced even tougher ones as JoshiMania went on.

It was the tag team contest between the team of Ayako Hamada and Cherry against the team of Mio Shirai and Mayumi Ozaki that proved to be the best of the night. While all women were familiar with one another,they don’t share any extensive history[2. See a previous team-up of Ayako and Cherry as they take on Ayumi Kurihara and Michiko Ohmukai here.]. Still The beautiful and devious team of Mio and Ozaki worked very, very well together. The veteran Ozaki brought out her top shelf stuff this weekend, not that Ayako Hamada gave her a choice in the matter. Ayako was excited, and a bit nervous, about her CHIKARA debut. Of course, she performed to her usual standard of excellence.

The match also contained a revelation: Mio Shirai is a fucking star. Her mix of personality, style, humor, and sadistic violence won over the crowd. She helped make this semi-random tag flow gracefully. Mio showed she could keep up with two all-time greats in Oz and Hamada, and here’s hoping her success in the US pays dividends for her when she returns to Japan.

And that was Night One. A fantastic night of wrestling, no doubt, but JoshiMania was just getting started. You can already purchase the DVDs for all three nights at Smart Mark Video. While you wait on those to ship, enjoy the rest of the photos below the cut.

But just one more thing! Dig, if you will, this picture of The Beautiful One, Veronica, as she lays into a fan that she felt was a bit too bold. Maybe she’s just too demanding? She’s never satisfied with those in attendance. I took the photo as I wondered, “Why do they scream at each other?”